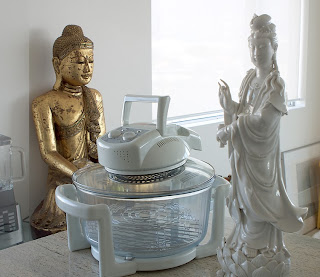 My new table/desktop oven is proving to be a blessing. Out with that Gaggenau nonsense (too complicated) and in with easy-cook 737. Both Buddha and Quan Yin are smiling upon the new addition though it is hard to figure out how to stir fry in an oven. So far Chicken limone is the star. Same as Chicken Camembert except you stuff lemons instead of Camembert cheese up the chicken. One pot cooking and you can watch how things progress. Loads of successes - salmon steaks in three minutes - so don't go too far away because I'll post some on the new site. Due about mid January.
Posted by Unknown at 2:57 PM