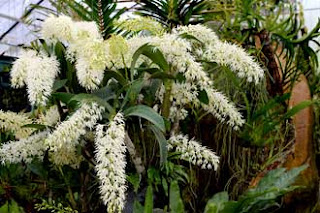 Queensland is certainly the place to watch orchids grow. The small pot of Sydney Rock Orchids we brought north from the Darlinghurst garden has really hit its stride this season. Northerners known these as King Orchids, but it's all in the family, Dendrobium speciosum, Australian native. Scientific detectives recently reclassified the species as Thelychiton speciosus but let's choose to give this a miss. The same bureaucrats will no doubt relabel everything again before too many moons have passed.

A wonderful perfume to these 'Kingys' (can't believe I used that term). Too bad the pollen in the air is causing 'spring sneeze'. I weep every time I pass the boisterous array as they dwarf the eight ton reticulating rock in the orchid igloo. Ah well, it will all be over in a matter of weeks. They only bloom for about a month around August.
Posted by Unknown at 7:08 AM No comments:

Borobudur and the bananas 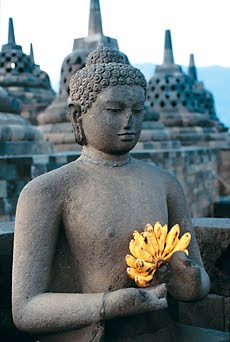 
Shared via AddThis
Posted by Unknown at 3:12 AM 1 comment: 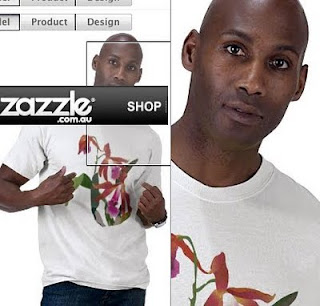 Decided to put my toe in the water and try some of my orchid art on T shirts. Googled Zazzle.com and set up one of my favourite orchids (Laelia tenebrosa) the national flower of Brazil. Available in a range of colours but white seemed right to me. Suits Latino. But if you are pale and freckled it might be a good idea to have second thoughts.

Lo and behold – a sale straight up. Most encouraging. The shape of things to come? Orchid art looks like a go. But first to sell the property, downsize, and then get really stuck into marketing orchids. Way to go!
Posted by Unknown at 9:42 AM No comments: 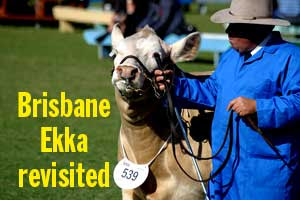 Big beef and broad brims still the order of the day, To watch the fat cattle parade for prizes you are inclined to think all's right in the world. Great, healthy, hulking beasts trundle past one upon the other as you wonder if there ever was drought. Why does Queensland seem to come out tops when it comes to show/grow food, agriculture, and happy kids. Must be the climate. There is nothing like the Brisbane Exhibition (Ekka) to get the pulses racing. Shonk and sensational side-by-side. Flash-n-trash and everyone in fun. Mind you, this is the last Ekka as we know it. Revamp for next year. I worry that bureaucrats and the electronic age will meet mid stream and bugger the works. The flowers were screwed up. And Dagwood Dogs had thin runny tomato sauce. Chips were ok though. Hmmmmm.
Posted by Unknown at 6:23 AM No comments: