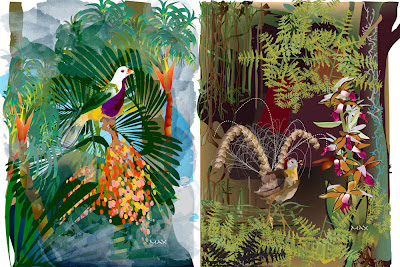 Drawn freehand on the Mac in Adobe Illustrator.
Wompoo Fruit Dove in fruiting Bangalow palms : The marvellous colours of the Wompoo Pigeon are rarely seen. Also known as the Fruit Dove the rather shy bird is a bit of a loner and lives high in treetops, feeds on palm berries along sub-tropical East Coast Australia.
Lyrebird with Swamp orchid : The shy Lyrebird is a tricky mimic and happily imitates other birds and sounds of the forest, car horns, cell phone rings, barking dogs, electric saws – you name it. Habitat, deep dark ferny forests. The Swamp orchid, however, grows alongside creeks and dams. It's a bit of a jump to unite them in the one visual. Then again they are both great Aussie icons not often seen in the wild. They seem to fit together in my way of thinking..